It seems to be an LGBT+ week at Hope Counselling and Training. I’m running a basic awareness session at Sheffield Hallam University tomorrow, and I have just come back from my regular slot as facilitator of the LGBT Network at EMFEC.

Today at the Network we reflected on the hows and whys of setting LGBT+ networks up, sharing resources and good practice to make them sustainable, intersectional, and successful in their aim of increasing support for LGBT+ people. I thought I would blog about some of the good practice discussed today. Although we were looking at education, much of this resonates with the community work I have done in many places.

LGBT+ people are at least 5% of the population, and when we take into account their siblings, children, friends and partners the figure of people who may need support around LGBT+ issues is much higher. As more people come out due to increased awareness, we may see these figures rise.

That’s perhaps around 10 per cent of the population who will feel safer and happier if they have support. Safer happier people who are able to be open and feel supported are more likely to achieve, are more likely to stay with their course or in their job, be more productive, be more able to participate in a team.

Happy, included people is not just good for morale, it’s good for business. 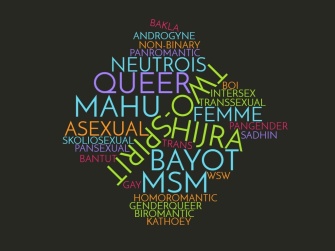 The graphic to the right demonstrates just a fragment of the global diversity of terms used for people who diverge from common experience in terms of gender or romantic and sexual orientation.

It’s impossible to pin down an umbrella term that truly covers this diversity, and all these words tell unique stories of individual experiences. Even when we use one term, it can mean different things to different people – to one person, lesbian might simply mean “attracted to women” – to another, it may tell a complicated story about politics, sexuality and relationship with gender.

At one time we kept adding more letters, and ended up with terms like LGBTIQA, or QUILTBAG, but no term will ever encompass everything, and so we seem to have settled on LGBT+. I hope that we can be expansive in our approach, and consider, for instance, bi people, asexual people, intersex people (who want to be included), and people who come from other cultures and use other terms and approaches.

It’s no good just saying LGBT+ and then talking about same sex relationships and that’s it. We need to think about the full diversity of relationships people can have with each other, and with gender itself.

Hopefully, the word intersectional, coined by Kimberlé Crenshaw, is catching on. If you’re new to it, here is Kimberlé’s TED talk on the subject. Essentially, she is saying that our multiple identities cannot be separated out but are woven through us in ways that complicate each other. 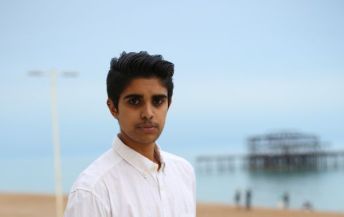 Sabah Choudrey (pictured left), queer and trans, British South Asian, and a practising Muslim, talks about this in their superb TED talk.

When we try to separate out different “diversity strands” people often feel alienated, unable to bring all of themselves into a space, or unclear whether they quite fit the label on the door. Chimamanda Ngozi Adichi, an amazing writer and thinker (who has also, sadly, said some problematic things about trans people), calls this “The Danger of a Single Story”. Her own mistakes reflect rather well the problem that even when someone is a wise champion of diversity and difference, it’s still possible to make mistakes about groups they have less connection to.

The Issues with LGBT+ Groups and Networks

Groups will take on a life that revolves around a few naturally dominant people or be propelled forward based on a couple of “doers”. Groups ebb and flow in membership as people leave and arrive. The longer they go on, the more cliquey they can become, and the harder it is for new people to feel a sense of belonging. Groups can stagnate and begin to fizzle as people move on.

And, of course, groups often reflect the hierarchies that exist in society, so that the people who are most in the centre or in control of what’s happening are often a reflection of, for instance, the kinds of faces most likely to show up in parliament or senior management.

The images below show some of the many other challenges our Network considered. 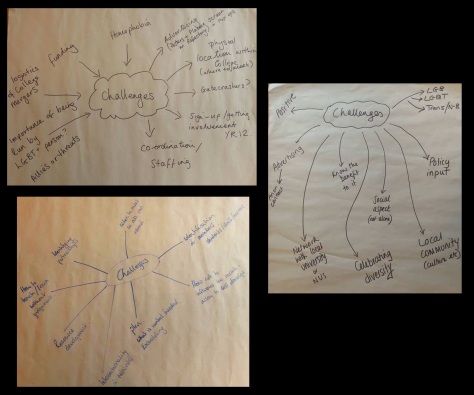 Often groups just “happen” because a (usually very put upon) LGBT+ staff member has been asked to or wants to “do something” for LGBT+ students, or because an LGBT+ student with a bit of personal resource wants a group to happen. This organic approach is good in that it isn’t too rigid, but it has its pitfalls, if some thought doesn’t go into the design from day 1.

In my training I use a “web model” to talk about the hidden threads of social support some people get in life and others miss out on. We all have some threads holding us (hopefully) but in other ways some of us may find ourselves dangling precariously. For instance, if a trans student finds their identity constantly undermined through deadnaming and misgendering, no matter how unintentional that is, they will find themself feeling much less socially supported than somebody not experiencing this.

My “web model” is a way of looking at the psychological impact of this lack of social support for some individuals where their life on the margins removes a lot of the supports many of us take for granted. Consciously building new threads to marginalised people is the best remedy, and for this to work, it takes both awareness and creativity.

You’ve got the will to do something? Fabulous! But let’s take some steps to make a structure that works for everyone. This list is not prescriptive, but it might help get things right from the start

First, consult. And given how hard LGBT+ people are to locate, this probably means doing an anonymous survey.

It’s the easiest thing in the world to survey your staff and/or student population via email, social media, and survey cards. You can find out; who would like support but is scared of coming to a group; what kind of support do they need; what are the specific issues they face; what access needs do they have; how many LGBT+ students, or relatives of LGBT+ people, there are (great for justifying time and budgets to the bean counters); what other demographics these students belong to; and which of them would be interested in coming forward as peer mentors and volunteers.

NB: I cannot stress this enough – make sure you are competent about LGBT+ monitoring questions and language before proceeding, and get a second, knowledgeable person to check the survey’s wording.

Use a sample document from another organisation and allow members to influence and develop it. Make sure that if a resource is going to be created, it is designed from the very start to be fully inclusive. Our local Trans Space Notts and Notts Trans Hub guidelines are one example of a co-created set of guidelines for inclusive working.

Make it people’s job to action inclusion, by welcoming new members, by learning about access needs they may not have themselves, by actively promoting the importance of difference over sameness.

Stress a compassionate approach which is continually learning – it’s okay to make mistakes, it’s vital to learn from them.

3. We are all allies

There is often some discussion about whether to include allies in these networks, but it is essential to include them somehow for two reasons. The first is that allies can often be not yet out LGBT people testing the water, and these can be people at their most vulnerable.

The second is that we cannot have a fully “safe space” where everyone within “understands” just because they are LGBT+ because the community is just too diverse. We need to make spaces as safe as we can through policy and ground rules.

Everyone will have stuff to learn, and everyone is a potential ally to other members of the community as well as a person in need of allies. Staff members and older students, by virtue of being older, are no longer subject to the specific issues affecting LGBT+ young people, so they too can act as allies even if they are LGBT+ themselves.

A fantastic young person friendly video on the ground rules of allyship can be found here.

So, we need to recruit allies and encourage them to take on some of the heavy lifting involved in making the world a better place for LGBT+ people. Things they can do? Challenge stuff, make the effort to learn more about sections of the community, raise support and awareness through actions.

One ally might do fundraising for badges that read “Support Trans Students” or “LGBT Allies” and encourage people to wear them and engage with what it takes to be an ally (just wearing a badge isn’t enough, but little things can spark bigger things!). Another ally might make a point of learning about disability inclusion, or to understand more about trans people. Another might support a campaign for gender neutral toilets, and do some of the admin and legwork for this (in full consultation with those most affected, of course!).

This doesn’t mean LGBT+ people should never be able to meet alone without straight allies present. It’s important they have that option and that their needs are always centred if LGBT+ is the support issue in that space.

This is why networks are better than groups; because a one size fits all solution is never going to work for everyone. A “web approach” of creating supportive resources that can reach as many individuals directly as possible is what is needed, preferably a web that helps create supportive threads from each person to others, rather than top-down processes that all rely on the same thread.

Hopefully your institution will have the following:

Sadly, we still live in a world where LGBT+ people are at risk of violence, where they can be estranged from family and community, where they are more vulnerable to exploitation, where there is still an enhanced risk of suicide due to stigma and marginalisation. Acceptance is highly variable and cannot be predicted based on class, religion, ethnicity, or other generalised assumptions but varies from family to family, community to community and postcode to postcode.

Good support is proven to help with these issues, however it’s important to consider the following:

This is just a snapshot of the today’s discussion at the EMFEC LGBT+ Network. To be part of the ongoing conversation, email EMFEC  or give me a call to discuss cost effective, tailor made training for your organisation. 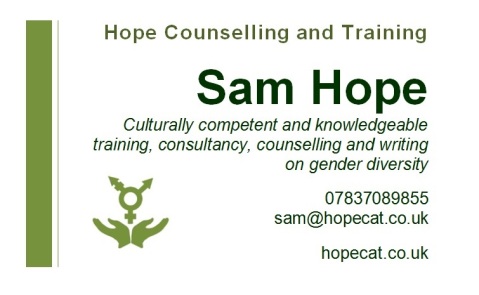