It was an odd experience, delivering trans awareness training at Nottingham Women’s Centre. I had spent many, many hours within those walls, and one thing you could always rely on was “man in the building” signs when somebody male was invited in for a meeting, training or other work.

“Should we put up “genderqueer in the building” signs?” I agonised, knowing I was walking into a building I am increasingly less comfortable

The timing was strange – the very next day I would be starting on hormone therapy, a therapy that will probably in time make me look and sound more male. Since making this decision, I am constantly being challenged that I am “really a trans man”. I try to explain to people – I am currently read as a woman, but I am non-binary. In future, I may be read more often as a man, but I will still be non-binary. I may acquire some privilege for passing as a man, but given how out I am, my gender experience will continue to be complicated.

What complicates things further is that I have a lot of experiences in common with trans men, and don’t always want to be excluded from that category. This leads me to somewhat simplistic statements like “I’m a non-binary trans guy” or “I am masculine of centre”. At the same time I still feel a great deal of shared identity with women too. I do not believe there is a clear, neat line that divides our experience or sorts us neatly into boxes.

Gendered language was not made by or for trans people, and one of the key elements of this particular training was to look at how language limits our ability to tell an accurate story about ourselves. Trans language is evolving with our empowerment. We no longer speak about “sex change” and are more keen for people to understand we were always trans, that becoming more visible and/or congruent is not the same thing as becoming something we did not used to be. 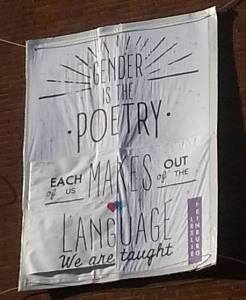 For non-binary people in a binary world this is a complex subject. While I was keen to centre the experience of trans women, who face the worst violence because of the double jeopardy of transmisogyny, the toxic interplay of sexism and transphobia, it was important to acknowledge they would not be the only gender variant people using the Women’s Centre. People like myself, who find ourselves in the uncomfortable no-person’s land between genders, may well find sanctuary there, as I once did.

I suggested to the trainees that we can often resolve conflicts by grasping a “both/and” principle and throwing out our belief in either/ors. “When I say I’m non-binary, for me that doesn’t mean I have no gender”, I tell them “for me personally, and this is different for others, I have a lot of gender, a complex relationship with both being a man and being a woman and sometimes something else entirely.”

Gender variance has always been treated with suspicion, and feminism has fought hard to normalise the idea of women expressing their gender in less constricted ways. As we explored language together at the training, we realised that “woman” is a wide category (“Ladies”, not so much). It is absolutely possible to include trans women and non binary folk who live predominantly as women (regardless of birth assignment) in the fold. Folks like me? Well, I don’t feel I would turn to women only spaces for support, but that’s a personal choice, and one I hope is never inflicted on anyone based on some constructed idea of how one should be a “proper woman” or “woman enough”.

The worst disservice is, of course, that gender variant people assigned female at birth have been pitted against trans women as if one or other deserves protection and inclusion but not both. But the truth is we all experience misogyny, or misplaced misogyny, in different ways and we all belong in the rather larger box labelled “those oppressed because of their gender”. The realisation is growing that the centre can be welcoming and supporting of a diversity of gender variant people, and that, rather than worrying about people forcing their way into the centre, which never actually happens, the true issue is that after a decade and a half of trans inclusion, the service is still very under-used by trans women, who are disproportionately affected by the very issues the centre is there to support, such as domestic violence and sexual assault.

Equally, gender variant folks assigned female at birth are also vulnerable. The isolation and marginalisation that comes with being transgender makes all trans folk vulnerable, and across the board within the trans community, we see increased issues related to assault, mental health, rape and childhood sexual abuse as well as domestic violence. People who feel woman enough to use a women’s centre should simply not have to worry that they will be quizzed at the door as to whether they should be there. For those concerned about safety, in all the years of trans inclusion, there have never been any incidents of cis men trying to gain entry to the centre for nefarious reasons by pretending to be trans. Cis men have other more direct ways, sadly, to violate women’s safety, and part of the learning here was to move away from imaginary panic-based scenarios and to focus on the facts of the vulnerability and need for safe space of members of the trans community.

But how do we deal with the reactions of other building visitors? Another concern. Well, how do we generally deal with people’s prejudices and put them at their ease? How did we get to the point that lesbians are accepted into women’s spaces? The process is no different here, one of modelling good practice and language, displaying comfort with trans visitors, and making trans people visible in literature and displays.

I put up a picture of Harnaam Kaur, pictured

right, to explore further. Harnaam is a cis (not trans) woman, but often in my training her image brings to the surface a lot of issues of prejudice – if this person wants to be a woman, I often hear, well they should make the effort to look like one. What does a woman look like? Well in this case, she looks like Harnaam Kaur, a Sikh woman who has decided to keep her natural facial hair.*

I’m thankful that the lovely workers at the centre get it, and show no prejudice. “This person is who they say they are”, is their response to the picture, and “we will use the pronouns they ask us to use and give them a welcome if they self-identify as belonging here”.

It really is that simple, a kind solution but also one that works. We struggled a bit with how to deal with non-binary folks, but in the end the solution is equally simple and elegant – if a non-binary person feels comfortable using the Women’s Centre’s services, which many of us, myself included,  wouldn’t, well then they can be there, because identity is complicated and in the end we choose the spaces and boxes and words that best fit us and avoid the ones that don’t.

With thanks to the open-hearted women of Nottingham Women’s Centre for their warmth and understanding.

*Edit: I used this image because Harnaam herself has desired these images to be used to challenge perceptions, and I chose a woman of colour rather than similarly bearded white women to bring into focus the issues of hairiness that exist for brown women. However, I have had feedback (from white people) that I am “using” a woman of colour’s story for my own purposes. I hoped I was educating people on diversity, but perhaps there’s some truth in that, so I have decided not to use this image again.

4 thoughts on “The Complexity of Identity”